I love seeing a good system in action, especially one that I helped to create, but I never want to lose sight of the fact that leadership transcends good systems everyday. 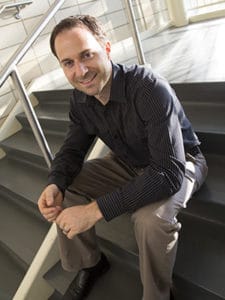 Dan Garrett, Managing Partner & DER (Designated Engineering Representative), is humbled by understanding that his leadership comes with an opportunity and responsibility to create a meaningful organization, and a culture that can reach far beyond what he is able to do as a single individual.

In 2015, Dan created Momentum Aeronautics with business partner, Kyle Taylor. He feels a tremendous amount of contentment and gratitude towards the opportunities that come with business ownership and believes it to be his biggest accomplishment yet.

As a kid, Dan enjoyed making model airplanes and was very curious about the mechanics of how things worked. That, along with a desire to know and learn everything possible about airplanes led to an obvious career choice for Dan.

This passion for aviation remains apparent in his daily life at Momentum. For Dan, it’s the combination of computers, software, engineering analysis tools, and math models that come together to create something real – something that can be used as a tool and has intrinsic value.

Dan has been in the technical/engineering field for almost 20 years with his first job as a CAD drafter for an architecture firm where he learned AutoCAD. This developed his ability to build mental pictures and translate those into lines on a computer screen that represents the real world.

Dan completed his Bachelor of Science in Mechanical Engineering Degree with an emphasis in Aeronautical Engineering from the University of North Dakota in 2005. It was this achievement that set the foundation to communicate ideas in a common language of importance for an engineer.

In addition to the language, his engineering education gifted him with the ability to effectively problem-solve. This ability forces an engineer to challenge his assumptions. When asked how his Education has impacted his work as an engineer and business owner, he responded, “Throughout my career, I’ve learned there is often no substitute for conducting a real-world test. Likewise, in business, brainstorming is a useful exercise, but until you start taking action, you won’t find your errors in thinking or locate your erroneous assumptions.”

Dan is extremely skilled in integrating the practical aspects of design with real calculations and mathematics. He views engineering as an extension and a collaboration between the theoretical and the practical.

This blending of applications has enabled Dan to understand mechanics’ concerns when working with aircraft, while envisioning the free-body-diagram or math model needed to be created to determine practicality. This inclination toward merging the practical with the theoretical is a rare combination to have.

His customers value and appreciate his attention to and concern for their expressed problems and needs, however it tends to be the hardest part of the job.

Despite his abilities and passion for aviation, a close second to this is business and leadership, which is unmistakable in the success Momentum has experienced thus far. Dan loves seeing a good system in action, especially one that he helped create, but doesn’t lose sight of the fact that leadership transcends good systems any day.

Dan believes strongly that there isn’t one single determining factor for good leadership in an organization, but when there is a lack, it is felt throughout and affects every employee, from the founders to the janitors.

Dan’s very passionate about family, especially in gratitude for his wife and four kids. It’s because of the placement of family as a priority, his perspective is rooted in more than just work and business.