Always be prepared for the worst outcome on the testing site, while also preparing everything carefully to achieve the best result. 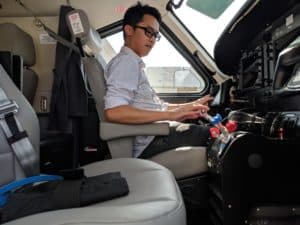 Stanley Victorio is an Aerospace Engineer with Momentum. Primarily tasked with flight testing, he brings his experience of developing estimations for drone navigation systems. A typical day may consist of analyzing seaplane structure, landing gear drop tests, or conducting flight tests such as brake system inspections.

Additionally, Stanley works with clients to troubleshoot failure analysis which include the buckling, yielding, or bending of an aircraft’s structure. Occasionally this step consists of creating CAD models and drawings to help clients understand the manufacturing process.

When asked what it’s like working for Momentum, Stanley noted the never-ending opportunities to learn. “While previously only knowing the theory, Momentum has helped me get my hands dirty working on real structural tests.” He considers this an indispensable experience in learning the limitation of theory and recognizing when it can be applied and when the results start to deviate from the theory.

Armed with an education from Washington’s Green River College, Stanley attributes his success to classes such as Mechanics of Materials, Aerodynamics, and foundational learning of the Finite Element Model. He feels the knowledge he gained allows him quicker understanding of the geometry involved in setting up for testing.

He certainly accomplished more than just the completion of a degree. A practitioner of the Martial Arts for 10 years, he decided to compete in his first big tournament which was held at the college.

Stanley was up against the odds as this tournament had no weight class and was open to all participants despite their belt level. Some were nearly twice his height, proving to be an insurmountable task. But what started as an attempt to receive extra credit in his PE course instead resulted in determination and competitiveness that would ultimately hand him the first place prize.

Perhaps this heroic effort, coupled with his academic success, contributed to being chosen as one of two Green River College’s representatives who would share advice with students about being successful; an experience that he considers one of his greatest accomplishments.

Stanley’s ambitions and goals are even more lofty and impressive. With a strong desire to fly airplanes (in addition to testing and fixing them), he hopes to receive his pilot’s license in the near future.

Even more incredible is his dream to participate in a space exploration program. “I’ve always wanted to see the scene outside of the Earth’s atmosphere,” says Stanley before reflecting on the difficulty of operating a space shuttle. Though one could detect a bit of doubt in his voice, it would be unwise to underestimate his tenacity and determination and dismiss his idea as merely a pipe dream.